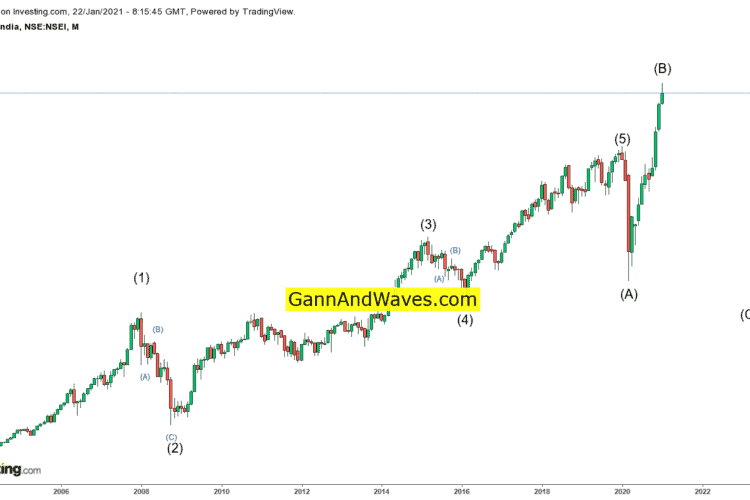 By Admin In Business, Planning

In this post, we will talk about the latest chart for the further prediction. Elliott Wave Analysis of Nifty with monthly chart is done below.

If you take a look at the month-long bar chart of Nifty in which it covers life time of move, you can observe a change in Elliott Wave counts after it breaks above 12430.

If you analyse the progress of the Major Wave (5), that started from 7511 on the lowest possible time frame to check the pattern.

This means Nifty has a positive zone for medium and long term if you are trading above 12132.  The closure of a complete weekly candle below the point of 12132 can cause a downside correction.

The Wave[v] has achieved the projection of minimum 38% after breaking above 14272. The next 61% projection is at 14976 which might or might not be achieved.

Now, we can analyse how the wave[v] progresses which started from 13131 on the lowest possible time frame to calculate the short-term levels and also check its pattern.

Shown above is the 30 minutes time bar chart of Nifty that covered a bounce after touching a low 13131 which we marked as start of wave [v] on the daily chart.

So, 14419 is still short-term downside breakeven point. It can be said that Nifty will stay in a positive zone for an extremely small term as long as you are trading above 14419 and  it can bounce further towards 14700-14863.

But if Nifty trades below 14419 for more than 15 minutes, we need to check the pattern once again.

Separately, we can also have a look at the decline after all time high 14653 to check its pattern and to calculate immediate levels.

The forecast of Nifty for tomorrow (Monday) is positive on the Elliott Wave Analysis done with the monthly, daily, 30 minutes, 15 minutes chart.

Even the medium and long-term nifty forecast is appearing positive with major support between 13095 to 12132. But if Nifty closes a complete weekly candle below 12132, it can cause a major correction once more.

When it comes to intraday Nifty forecast, that is also positive between 14426 and 14400 range as an immediate support.

Basically, Nifty lies in a positive zone if the trading is above 14400 and it also has a possibility to bounce between 14540 and 14617.  But the pattern needs to be checked again in case the Nifty traders below 14400 for more than 15 minutes.

The intraday, short term low risk buying range and stoploss is between 14426 and 14400.  The minimum upside target range lies between14540 to 15617 that can be extended towards the range between 14700 and 14863. The trade needs to be managed with a stoploss that is trailing after it

You can think about selling only after the close of a complete 15 minutes candle below 14400. But the low risk selling range, targets and stoploss can be achieved only after a break below 14400 is confirmed. As a trader, you can plan your individual trade according to the levels, risk tolerance capacity and the conditions which are explained.

Gann and Waves updates its users about Nifty Elliott Wave Analysis along with the overall forecast and important levels. But the prediction can have a slight change in the case of gap openings. It can sometimes happen that the breakeven point breaks or achieves the target at the opening itself. This causes the Nifty forecast to change after achieving levels. Also, the pattern might change during market hours and result in change of the levels.

Irrespective of the fluctuations, the prediction still works most of the times. But the most accurate Nifty predictions can be made only during the marketing hours by having a look at the internal pattern.

For real time Nifty forecasting you can join our telegram channel.-

We also predict Bank Nifty, commodity, and stocks movement. You can also join our course; you can contact us on 7330-777-373.